Must present coupon before starting job. Not valid in combination with other discounts or offers. Excludes trip fee or diagnostic fee. Only valid for standard pricing

Click the image above to find out about our Extended Service Agreement offer.

Click/Tap One Of the Buttons Below

Be In Comfort provides the 5-Star heating and cooling services to homeowners in Turlock,  CA.

When possible, we even offer: 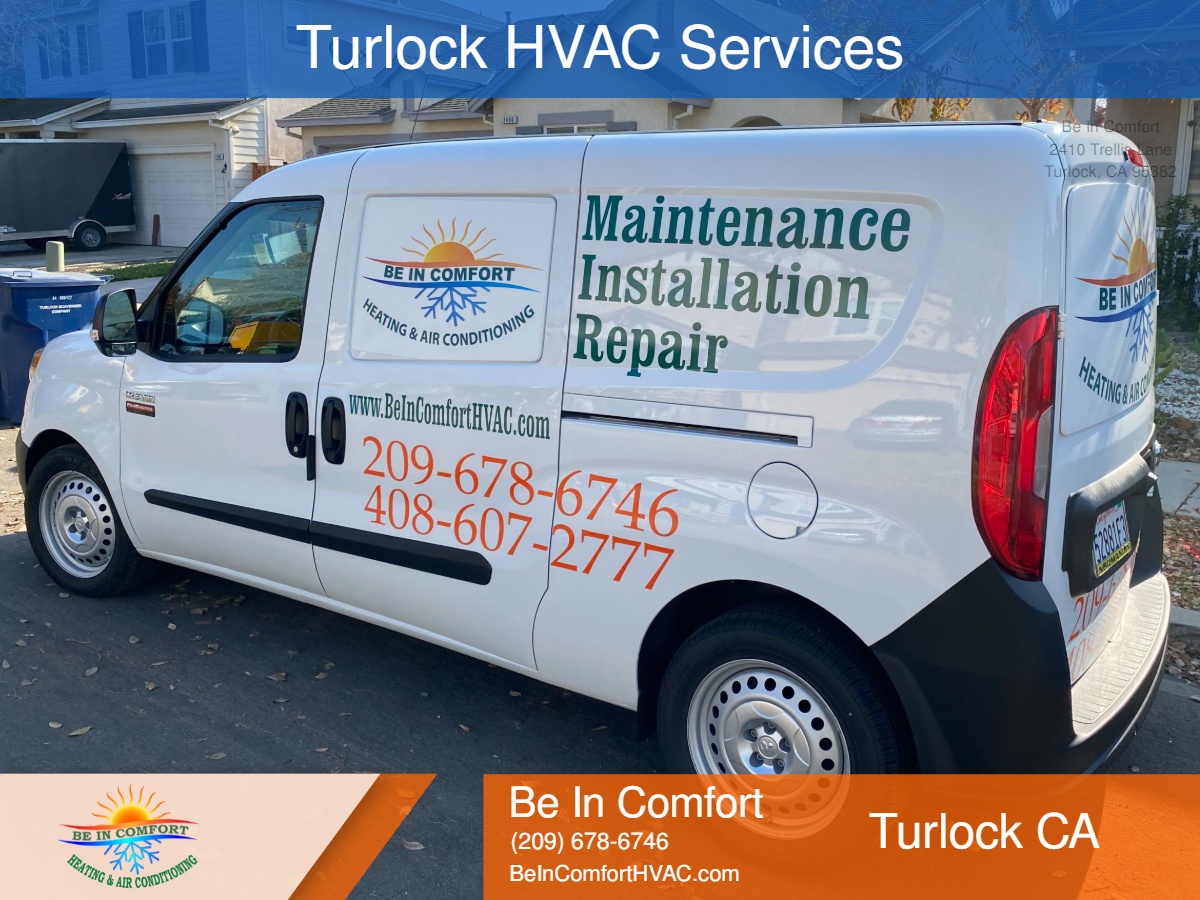 Turlock HVAC Services - Be In Comfort 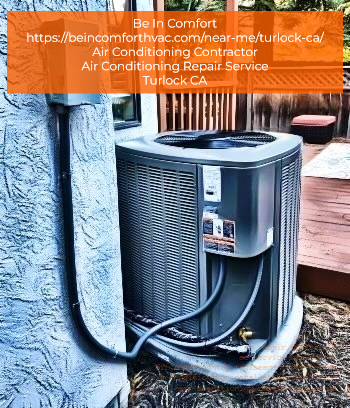 Northern California can really heat up in the summer, and you'll want your home air conditioner to keep you cool. Be In Comfort can help you if your air conditioner stops working or you want one installed in your home.

Learn more about our AC repair and related AC services on our air conditioning service page.

Northern California can also be very cold in winter. Naturally, you depend on your home heater to keep you warm.

Find out more about our furnace repair service on our heating services page. 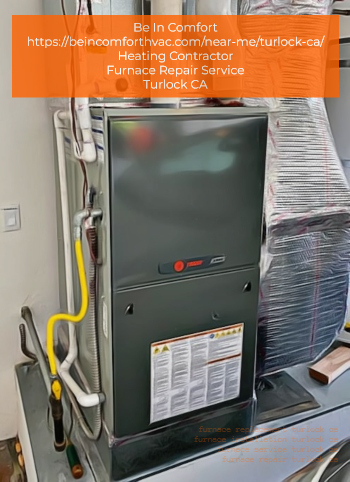 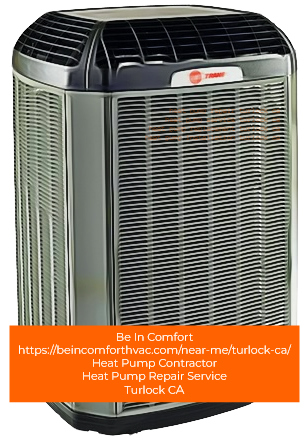 The heat pump keeps us warm during the fall & winter months and cool during the summer months.

If your heat pump doesn't work as it should, it can make your home very uncomfortable.

We know that everyone in your home is affected when the water heater breaks down. It's an essential part of everyday home life. And, we can take it for granted.

When you have only cold water, it can suddenly stop everything from washing dishes to washing clothes to bathing. 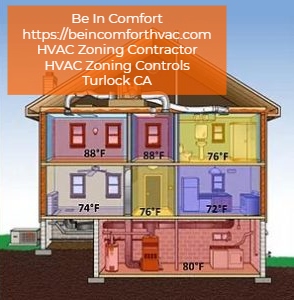 HVAC Zoning Contractor Be In Comfort

You can save money and have more comfort in your home with zoned heating and cooling (also known as Zone HVAC, Zone AC, and HVAC Zoning Controls).

Find out more about our zoned HVAC systems page. 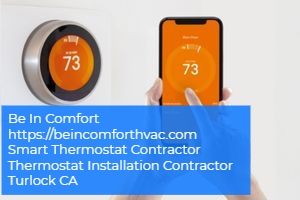 Smart thermostats allow you to monitor and control the temperature in your home from any smart device.

You can also control it from your couch, or from anywhere else.

It can also help you reduce your energy bills.

Find out more on our smart thermostats page.

Area Served By Our Turlock Office

Turlock is located in Stanislaus County in California. It is home to 55,810 people in 2020. It is located at the intersection between Modesto, Merced and State Route 99.

The town was founded by John William Mitchell, a prominent grain farmer, on December 22, 1871. It consisted of a depot, a post office and a few other buildings. Mitchell declined to be the town's name. Instead, the name "Turlock", was chosen. It is believed that the name Turlock comes from Turlough, an Irish village.

Mitchell and his brother were successful businessmen who bought land and developed large herds cattle and sheep. These were then sold to gold miners as they arrived. They also cultivated large tracts of land in the tenant system and were leaders in wheat farming. The Mitchells eventually owned the majority of the land, more than 100,000 acres, stretching from Keyes to Atwater. The Mitchell estate sold 20-acre lots for $20 per acre in the early 20th century.

It was a bustling hub of activity that grew into a prosperous city by the end of 19th century. However, it wasn't incorporated as a municipality until February 15, 1908. At that point, the majority of the city was surrounded by intensive agricultural development. Agriculture is still the main economic force in the area. Swedish immigrants were the majority of those who arrived in the region. An early San Francisco Chronicle article noted that the region and community's lacteal productivity was "hand it to the Scandinavians" because they know how to run a dairy farming operation."

Turlock became known as the "Heart of the Valley" due to its agricultural production. After a boom in construction and housing demand, Turlock saw a lot of growth in residential and commercial areas.

In the 1990s, the housing boom in Turlock declined, but it rebounded in the second half. This was partly due to the San Francisco Bay Area's growth, which created a greater demand for affordable housing in outlying regions. The dot-com bust caused housing demand to increase, resulting in higher house prices in an area that was once known for its affordability. The Highway 99 corridor has seen significant growth due to a recent boom in retail. In the late 1990s, the city reached Taylor Road as its northern boundary for urban growth. Growth beyond that point is limited by the city's Master Plan.

Turlock's population in 1930 was 20% Assyrian. Their presence was so significant that the town's southern portion was called Little Urmia. This refers to the area of northwestern Iran where most of its residents came. Ripley's Believe It or Not cited Turlock as having the highest number of churches per capita in America in the 1930s. This was partly due to the many ethnic churches that were established for the small settlement population. There have been many religious centers that reflect a diverse population such as Sikh Gurdwaras and Assyrian Christian churches. Also, there were numerous mainline Protestant, Mormon, and Roman Catholic churches.

California State University, Stanislaus opened its doors to students in 1960. This helped to stimulate growth as the university grew in its early years. State Route 99, formerly U.S. Route 99, was built through the region in the 1970s. It largely bypassed the Turlock-incorporated areas and took the city to the west through mostly undeveloped land. The city has expanded west to meet the freeway's northern-south route, but urbanization west of the freeway is only just starting to take root. Comprehensive growth master plans were created in the 1960s to ensure that the city can grow orderly.

There were 18,408 households, with a median household income of $39,000. The city's racial makeup was 72.3% White with 1.4% African American, 0.9% Native American and 4.5% Asian. 0.3% Pacific Islander. 15.2% of other races were represented, while 5.4% came from two or more races. 29.4% of the city's population was Hispanic/Latino of any race. 4.9% of Turlock's residents reported Assyrian ancestry. This was the fourth highest percentage of Americans for this category. It was also the highest in a community other than Oakland County, Michigan. Also, it was the only place in this category not located in Detroit's northern suburbs.

Culturally, the area is home of large numbers of Americans of South Asian descent (particularly Sikhs), Mexican Americans, and people of diverse European descent. The area was settled by the Portuguese and Swedes in the early days. In recent decades, a large Portuguese-speaking population has sprung up in the city as a result of continued immigration from Portugal's Azores Islands. Turlock is the home of the Assyrian community, which arrived in America in the 1910s to find farming opportunities. In 1924, the Assyrian Evangelical Church was founded. By the 1950s, 8% Turlock's population was Assyrian. In the 1970s, there was a significant influx of people to Turlock due to political strife in Iraq. This also happened in the 1980s after the 1979 Islamic Revolution in Iran.

Turlock's largest employers are Foster Farms, Emanuel Medical Center and Turlock Unified Schools District. Since 1956, MedicAlert has been based out of Turlock. It is a membership-based, non-profit charitable organization that provides 24/7 medical information. Turlock is home to La Perla Tapatia Supermarkets.

Each of the five members of the Council are elected for four-year terms. Turlock City Council meets every Tuesday at 6:00 pm. City Hall can be found at 156 South Broadway, Turlock. The four-year term is also served by a City Treasurer directly elected.

The Turlock Journal is a local newspaper that has been continuously in operation since 1904.

Things To Do In Turlock

Turlock has many fun activities. There are many ways to spend your time in Turlock. From exploring the historic downtown to seeing the art galleries to visiting antique shops that sell treasures to checking out live music on Main Street, you can find a show at one our local theaters. Stanislaus State University is also located in Turlock.

Nearby Restaurants in Turlock, California

Nearby Hotels in Turlock CA

Nearby Attractions in Turlock, CA

Nearby Airports in Turlock

Use this form anytime